What This Product Does

The TL-SG1008PE is an 8-Port Gigabit Desktop/Rack mountable Switch with all 8 ports supporting the PoE+ standard. It provides a simple way to expand a wired network by transferring power and data over a single Ethernet Cable. With a total power budget of 124W, up to 30W per port, TL-SG1008PE can power more high-powered devices such as wireless Access Points (APs), IP Cameras or IP Phones. Moreover, with innovative energy-efficient technology, the TL-SG1008PE can save up to 75% of the power consumption, making it an eco-friendly solution for your business network.

How This Product Works

All 8 ports of TL-SG1008PE support Power over Ethernet Plus (PoE+) standard which can automatically detect and supply power to any IEEE 802.3af/at compliant device(s). In this situation, the electrical power is transmitted along with data in a single cable, allowing you to expand your network where there are electrical cables or outlets, where you wish to fix devices such as APs, IP Cameras or IP Phones.

TL-SG1008PE has a priority function which helps protect the system when its power is overloaded. If all PoE+ devices’ power consumption is greater than or equal to 124W, a priority will be arranged among the 8 PoE+ ports, at which point the system will cut off the power of the lowest-priority port. 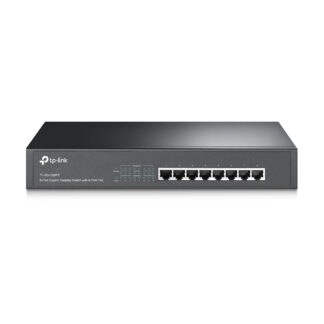